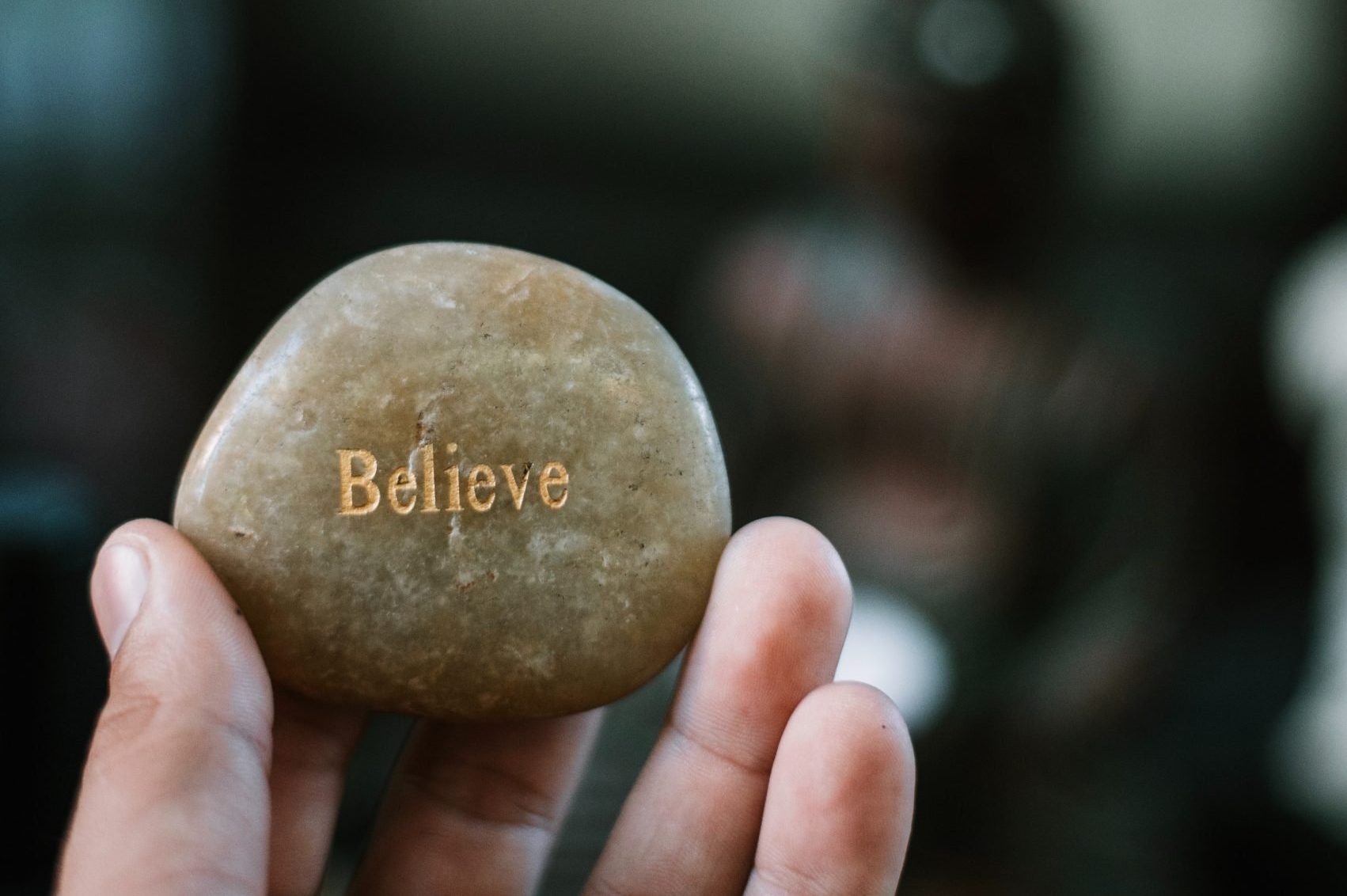 Examining what we believe is important because our beliefs shape our thoughts, which dictate our actions.  Sometimes our beliefs change over time as we grow and are exposed to different ways of seeing the world.  A good question to ask ourselves during Lent is “Are my beliefs in line with the ways of God?”

May the words of my mouth and meditations of our hearts will be acceptable to you, Lord, Our Rock and Our Redeemer. Amen.

In today’s reading from the Gospel according to Luke, Jesus mentions two tragic events in Israel at that time, although we have no record of these events in history. First, he mentions some Galileans who were killed by the Roman governor Pilate while they were offering sacrifices to God. Second, the tower of Siloam fell and killed 18 people. The way Jesus says this implies that the Israelites believed that these people met their deaths because of their sins. If we went back in time and witnessed these events, would we have believed that?

So why did the Israelites believe that these people met their deaths because of their sins? Most likely, the source of their belief was the Hebrew Bible, better known to us as the Old Testament. Deuteronomy, chapters 28-30, states over and over again that if the Israelites do what is right, they will be blessed; if they sin, they will be cursed by God. The Prophet Ezekiel repeats the same warning over and over again: If you sin, you will die; if you turn away from your sin, you will live.

Using the parable of the fig tree, Jesus tells them that God is giving the Israelites more time to repent, so they’d better turn their lives around. Otherwise, Jesus warns, they will meet the same fate.

When I reflected on this scripture reading this time, perhaps because of all that is going on in the world, I wondered how many us even believe that bad things happen to bad people especially when we cannot even agree on who is bad. We have seen the same person we would disapprove of being cheered by others and vice versa. The problem may stem from why we believe what we believe or why we choose to believe what we believe.

Webster’s Dictionary defines belief in three different ways. First, belief is a state or habit of mind in which trust or confidence is placed in some person or thing. For example: Belief in God. Second, belief is something that is accepted, considered to be true, or held as an opinion or conviction. For example: Political beliefs. Third, belief is a conviction of the truth of some statement or the reality of some being or phenomenon especially when based on an examination of evidence. Example: Belief in the validity of scientific statements. So, you can see that most beliefs do not require solid evidence. We decide what we want to believe.

Recently, I came across on YouTube an interview of Putin by an NBC news reporter Keir Simmons, who is British. This interview was done about nine months ago. At one point, when the reporter Simmons asked about Russia building its military near the border of Ukraine, Putin called it one of several military exercises the Russian Federation was doing not just near the border of Ukraine but other borders of the Russian Federation, such as in the Far East and in the Arctic. Putin added why was this any different than the military exercises the U.S. was doing at the same time in Alaska, in direct proximity of Russia’s borders. Putin said that the reporter Simmons probably didn’t even know about the U.S. military exercises because they were not in the news.

The difference in their attitude about written and verbal agreement remind me of the time when I was going back to Korea to work for a weekly news magazine in 1991 after living in the U.S. over 26 years. When I told about my job offer in Korea to a Korean-American friend who was a lawyer and who had an experience working in Korea, he advised that I should not ask for a contract because that would be an insult in Korean culture. Because of this experience, I had to ask myself, did misunderstanding happened between NATO and Gorbachev because of cultural differences? Gorbachev thought it was binding because verbal promise was given and NATO dismissing it because they believe without a written promise, it is not binding.

When I think about the different cultures holding different beliefs and the degree to which our beliefs affect our lives, instead of being dismayed by disputes, conflicts, and wars we have, perhaps we should be amazed that we do not have more of them.

As someone who was raised in a culture which had various religions co-existing, initially I had a difficult time understanding why in Western Civilization, there has been wars in the name of religion. What I had a hard time understanding reasons for wars among Muslims, Jews, and Christians when all of them supposedly believe in the same God, the God of Abraham.

But when we examine these wars carefully, I am not sure they were really about the difference in beliefs but more about wealth and power. Today, we Christians like to point out what Muslims are doing in the name of their religion, but then, we have to ask ourselves, have we done any better in the past? In some ways, Muslims, overall, might have done less harm, not because they were better but because they held power shorter than Christians.

Did you know that the word “ghetto” comes from the time when Jews were forced live in a designated area in Venice, Italy, in 1516? Christians were in power and they locked Jews into this ghetto area every night and guarded the gates. Jews were not allowed to own property and one of the jobs they were allowed was being merchants and money lenders. The historian Howard Sachar states that “in the 18th century, as many as three-fourths of the Jews in Central and Western Europe” were limited to these two occupations. In the same article, this historian points out that Christians in the middle ages believed that charging interest on borrowed money was sin and that kept many Christians from becoming money lenders or better known as financiers (myjewishleaning.com/article/usury-and-moneylending-in-judaism/amp/). Obviously, that belief no longer exists. Our beliefs do change with the times—hopefully for the better.

Most of you might know that I am an ordained elder in the United Methodist Church, which means I can serve as a pastor. The name United Methodist Church stands for two denominations, Evangelical United Brethren and Methodist Church, coming together in 1968. But soon, my denomination might experience a split over the issue of homosexuality, whether a homosexual person should be ordained or that the clergy should be allowed to officiate same-gender wedding. The worst part of this dispute is that both parties are quoting the Bible. Each side firmly believes that the Bible defends their position.

We know that this is not the only time that the Bible has been used by both sides of a dispute, each side believing their position is supported by the Bible. People have quoted the Bible to justify slavery, to abolish slavery. Methodists split over the issue of slavery in 1844 and it took almost a hundred years, 1939, to come back together. Moreover, Methodists were formed by John Wesley, who was originally an Anglican priest.

I have a book entitled Jewish Wisdom written by Rabbi Joseph Telushkin. The book is a kind of guide on how to apply biblical, Talmudic, and modern Jewish insights to daily living. In the beginning of the book, he writes about how 613 commandments were eventually reduced to one. He cites Psalm 15 reducing the 613 commandments to 11, then the Prophet Isaiah reducing it to 6, and then eventually just 2: First, Do justice. Second, Carry out act of righteousness (or charity). Finally, the prophet Habakkuk reduced it to one: The righteous shall live according to his faith. Rabbi Telushkin ends this chapter quoting Moses Maimonides, a Jewish philosopher and rabbinic scholar of the middle ages: “The purpose of the law of the Torah . . . is to bring
mercy, loving-kindness and peace upon the world (pp. 7-10).

One commandment. Simple enough. But how are we to apply it in real life when life is not so simple? Rabbi Telushkin illustrates this in his book which is over 600 pages. Here are sample topics he discusses: Honesty, Dishonesty, and the “Gray Areas” in Between; Truth, Lies, and Permissible Lies; “A Physician Who Heals for Nothing Is Worth Nothing”: Medicine and Doctors; “Like Lambs to the Slaughter”: Why Did More Jews Not Fight Back?

I don’t know about you, but the problem for me is trying to figure out what it means to love your neighbor as yourself. What is truly a loving act toward me or to others? What I consider a loving act might not be a loving act to a person who is on the receiving end or we get hurt because our loving act was not appreciated enough. We have the expressions such as spoiled, over protected, taking it for granted, no good deed goes unpunished, and so on. Or, even think about all the books that interpret the Bible. The Bible is only one book, but the number of books that interpret the Bible could probably fill this building and more.

I used the sermon title “What do you believe?” because what we believe dictates our behavior, how we live. Once I found a quote that illustrates how one small act leads to something far bigger. It goes like this. “Watch your thoughts, they become words. Watch your words, they become actions. Watch your actions, they become habits. Watch your habits, they become character. Watch your character, for it becomes your destiny.” This quote is ascribed to Frank Outlaw, who started a U.S. supermarket chain called Bi-Lo (founded in 1961. Went out of business, April 18, 2021; stores in Ga, SC, & NC).

Initially, I thought that I could easily replace the first step, “thoughts” with “beliefs.” But then, I realized that often our beliefs control our thoughts and ultimately our beliefs dictate how we live and how we interact with others. We can easily start the quote with, “Watch your beliefs, they become your thoughts.”

During this Lent, may we set aside time to ask ourselves what we believe and examine and question whether our beliefs align with God’s thoughts and God’s ways.