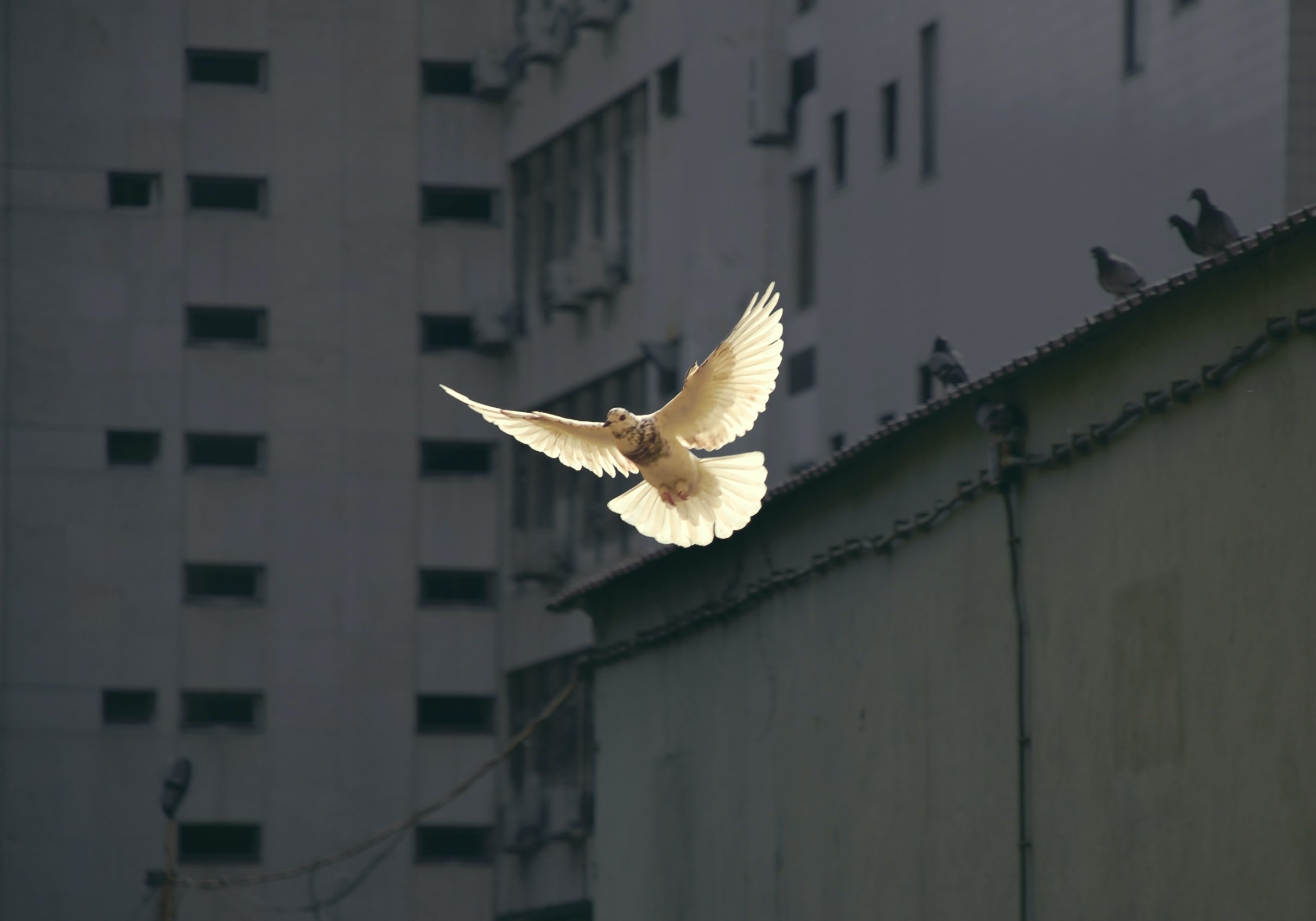 John the Baptist’s father, Zechariah, gives a powerful prophecy of the coming of Jesus which speaks of God embracing the violence, injustice, and grief of the world with comfort, compassion and peace. In recent days, our congregation has been led to share the peace of God’s embrace with Afghan refugees in our city.

Zechariah is not a household name when we think of the people and the stories of the Advent season, this season of waiting, of anticipation of the birth of Jesus.

He was a Hebrew priest, and he was the father of John the Baptist.  And he and wife Elizabeth were old, and like Abraham and Sarah in the Old Testament.  They had given up on ever having children long ago.

And then a more household Advent name, an angel named Gabriel , appeared to Zechariah while he was doing his priestly duties in the temple.

And as angels have a habit of saying to humans they appear to, Gabriel said “Don’t be afraid, Zechariah, your prayers have been heard and your wife will have a son, and you shall call him John.”

And then the angel tells Zechariah what his son John’s role will be, to prepare the way for the coming of the Messiah.

And this was too much for Zechariah to imagine, especially the idea of he and Elizabeth playing such an important role in God’s plan of bringing salvation to the world.

So he says to Gabriel, “How can I know what you’re telling me is for real?  I mean, I’m an old man, and my wife is no spring chicken either!”

And to quiet Zechariah down, Gabriel makes it so he can’t speak until his son is born.  That’s a whole another story in itself.  But the main takeaway that I get from it is this “Don’t underestimate what God can do with you and through you.”

I’m going to do something with you that you may have never imagined before! “Fasten your seat belt!” and “put your mask on!”, We’re going for an e-ticket ride!

(Do you know what an e-ticket ride is?  Disneyland used to have coupon books with different letter coupons that you tear out to get on the rides.  The lower down the alphabet, the bigger the thrills.)

Our God is a God of surprises.  And also a God who follows through on His promises.  And so just as the angel said, Elizabeth bore a child, and they named him John.

And Zechariah was so beside himself, so proud to become a father, so overwhelmed with joy and gratitude to God, that he gives this amazing proclamation, really a prophecy of what his son John will do, and what this coming Savior will do.

You know, as powerful as Zechariah’s prophecy is, it sometimes gets overlooked or lost because it’s sandwiched between on the front side Mary’s Magnificat, her song of praise of becoming the mother of Jesus,

And then on the backside, we have his son John the Baptist, the voice crying in the wilderness for people to repent and prepare their hearts for Christ’s coming, shouting Prepare the way of the Lord!

There have been memorable songs made from Mary’s Magnificat and of the sermon of the guy who wore camel hair and ate grasshoppers dipped in honey.

In our Mennonite hymnal alone, there are six songs based on Mary’s song.  And the musical Godspell forever embedded John the Baptist’s message in our minds with “Prepare Ye the Way of the Lord”.

But until this week, I had never heard the words of Zechariah put to music.  But that all changed when I stumbled upon one this past Wednesday.  And we’re going to listen to it at the end of this message.

And it’s an injustice that such a beautiful proclamation about the justice of God isn’t more familiar to most of us, because Zechariah’s message really is poetic and powerful.

The last half is especially memorable to me, where he first talks about his son John’s role and then switches seamlessly into God’s son Jesus’ role in bringing light and hope and salvation to the earth.

Let me just read that part again, for the people in the back to hear.

76 And you, child, (that’s John) will be called the prophet of the Most High;
for you will go before the Lord to prepare his ways,
77 to give knowledge of salvation to his people
in the forgiveness of their sins,
78 because of the tender mercy of our God,
whereby the sunrise shall visit us from on high  (that’s Jesus)
79 to give light to those who sit in darkness and in the shadow of death,
to guide our feet into the way of peace.”

Our Advent theme today is Dare to Imagine…God’s embrace of peace.  And as we listen to Zechariah’s words here, can we just imagine it describing a God embracing a world that he loves so deeply,

God embracing the world with peace in the midst of chaos and violence.

Our world is yearning for God’s embrace, God’s warm and comforting and compassionate embrace.

There are a lot of people in a Detroit suburb longing for God’s embrace in the aftermath of the school shooting at a high school this week that left four teenagers dead and several more injured.

There are a lot of people all over the world longing for God’s embrace as they grieve the loss of loved ones due to COVID-19, and now another concern for more infections, hospitalizations and deaths due to the new Omicron strain.

And there are a lot of people in countries like Afghanistan longing for God’s embrace who are suffering at the hands of oppressive governments and hoping for a way out so they no longer have to live in fear, and be able to live in peace.

You and I are called to be the hands and feet of God in the world, and sometimes being hands and feet also includes being arms and voices and hearts that embrace people who are longing for mercy, and light, and peace.

Yesterday a bunch of us here at Daniels Run Peace Church caught a glimpse of what it’s like to function as God’s embrace to people who are desperately in need of peace and a fresh start on life.

Let me back up a few days.  This past Wednesday night, Steve and Cindy Fogelman and I attended a meeting organized by a group called RAFT- Resettling Afghan Refugees Together.

RAFT began in August as a response to the withdrawl of the United States military from Afghanistan, in anticipation of the arrival on our shores of thousands of Afghan refugees.

At that meeting, we connected with some of RAFTS leaders who told us that there was a group of four refugees who had just moved into an apartment in Fairfax.  They ranged in age from 15-29, and they were related to each other in some way.

They said that the apartment was nice, but it was very small and they had zero furniture or supplies except for some basic food items.  Melanie was the woman from RAFT who told us about this group, and said to us,

“I need to find them a sponsor in the next few days, so if you are looking to take some refugees under your wing, I’d love to pair you up with them.”

Steve, Cindy and I told her we would sleep on it and pray on it and get in touch with her the next day.  Sure enough, right and early on Thursday morning Steve called me and said,

“I think we should go for it.  Cindy and I will get the ball rolling and we’ll need to work at putting a team of people together to support these group of young Afghan refugees.”

And that’s what’s been happening for the past few days, basically nonstop.   It feels like we’re on an E-ticket ride!

Steve and Cindy have been amazing catalysts to making all this happen.  On Thursday afternoon, and then went over to meet the group at their apartment and assess their situation to see what they needed.

Then yesterday afternoon several of us from the church, along with some of Steve’s family, went over with full SUVs and trucks to set up the household and get better acquainted with our new Afghan neighbors.

It was an afternoon filled with not only much hard work but also much joy, and laughter.

After Karen and I got home, Steve called and one thing he said was, “Today we were exactly where Jesus would have been.”

In a very real way, yesterday felt like God wrapping His loving arms around all of us—Americans and Afghans–and embracing us with His mercy, comfort and peace.

I’m excited about building a relationship with Wazhma, Ruk, Abdul and Taiba.  And they are excited to get to know us as well.  When Ruk found out I was a pastor and that we were from a church, she said,

“I want to visit your church sometime soon.  I’m Muslim, and I want to get to know you all better and learn more about Christianity.”

I said, “That’s what I and our church want to do as well!  We want to get to know you better and also learn more about your Afghan culture, your Muslim faith, and all that you have gone through.  We have so much we can learn from each other”.

Thank you to everyone who was there, and who donated items and money for our Afghan family.   It took a while for us to get to this point, but we got here.

I want to close with a quote that I read in an Advent devotional this week, and then with that song about Zechariah’s prophecy that I told you about earlier.

The quote is by Joan Chittister, and I think it connects so well with what the embrace of peace looks like when it is fleshed out,

And with what’s happened the past few days and the relationship with our new Afghan friends that we are forming.  And it flows both ways, from us to them and them to us.

This kind of peace comes from the center of us and flows through us like a conduit to the world around us.  The kind of peace is the peace of those who know truth and proclaim it, who recognize oppression and refuse to accept it, who understand God’s will for the world and pursue it.

Now let’s listen to the song “Benedictus” inspired by Zechariah’s prophecy, sung by a group called “The Potters Gate”.  May it be a prayer that God will continue to guide our feet in the way of peace, both individually and as a congregation.