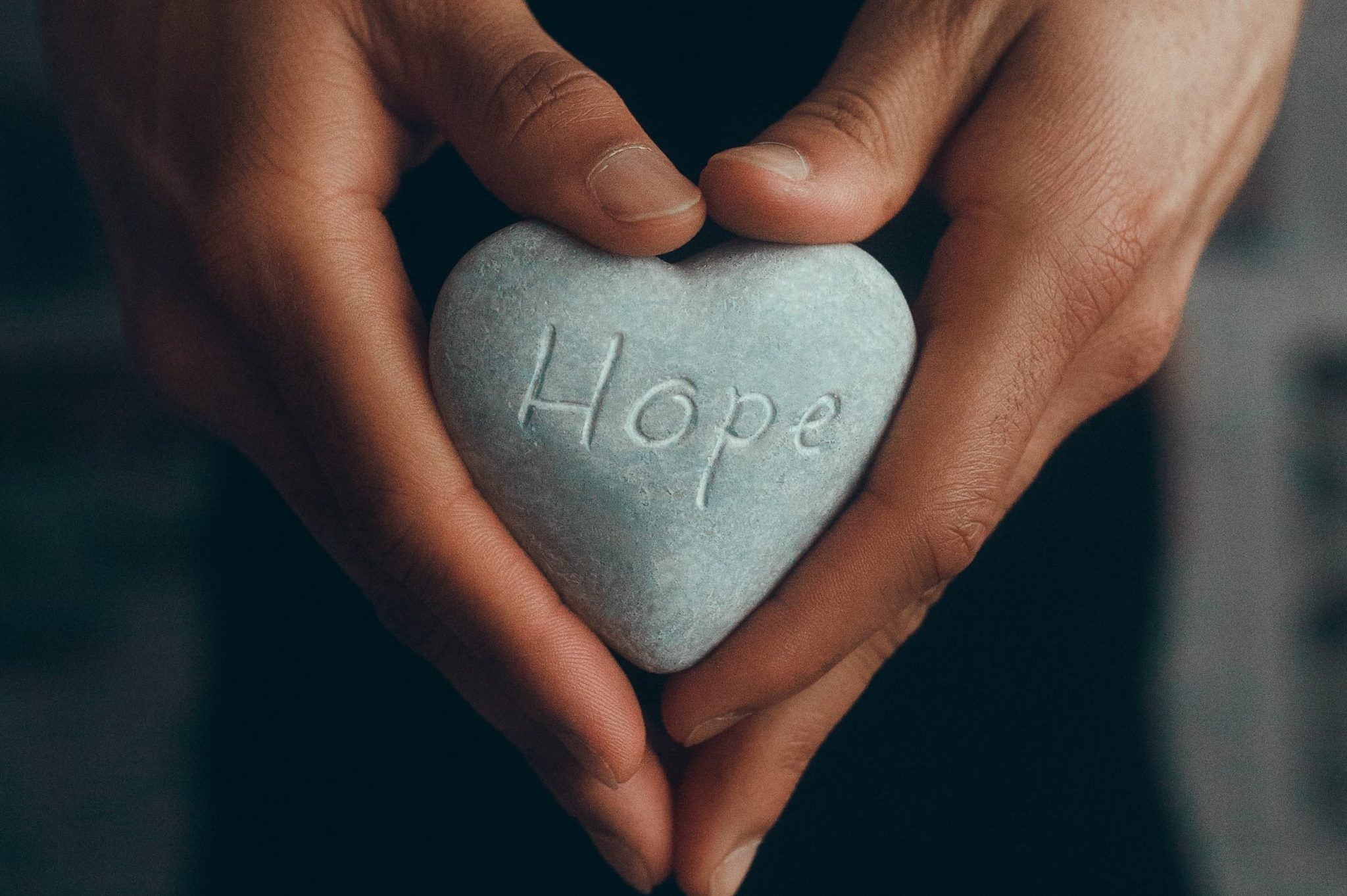 Advent is a season of waiting with hope for the promise of restoration that is fulfilled with the coming of Jesus into the world.  We are invited to look for signs of God’s restoration taking place around us, and also be willing to personally be restored in our relationship with God through receiving and embracing his unconditional love for us.

In Spanish, the verb “esperar” means two words in English—the first word is “wait”, and the second is “hope”.  I can’t think of a better word than “esperar” to describe Advent—it is a season of waiting, and a season of hoping.

Before we get to Christmas, it’s important to go through Advent, when we wait and we hope for the coming of Jesus the Messiah and Savior into the world.

C.S. Lewis, in his classic children’s series The Chronicles of Narnia, depicts Jesus as Aslan the lion, and Lewis says that

“Wrong will be right, when Aslan comes in sight, at the sound of his roar, sorrows will be no more, when he bares his teeth, winter meets its death, and when he shakes his mane, we shall have spring again.”

Advent is a season to believe in Aslan, to grasp the hope that God will make all things right.

One word that describes the hope of Advent is restoration.  Our world longs for restoration, and with the coming of Jesus, God made flesh, the promise of restoration is here.

The theme that some of our brothers and sisters in the Mennonite Church have chosen for this season of Advent is “Restoration is Near”.  The overall theme verse that they chose is Psalm 80:3,

“Restore us, O God, and let your face shine, that we may be saved.”

The idea of restoration lends itself to all kinds of images.  Let’s think about that for a minute:  What images come to your mind when you think of restoration, or something being restored?   (allow for responses)

Other examples of restoration are: Artwork being restored, furniture restoration, cities buried in the ancient world being uncovered and parts of them put back together.

One image of restoration that I thought of took place in our family’s garage when us kids were growing up.  I was already in college, but my younger brothers worked with my dad to restore, to rebuild two old clunker cars.

Back then we called old clunkers “jalopys”.  (remember that word?  I haven’t heard it in a long time!)

My dad and two of my brothers bought two jalopy FIATS— You know what FIAT stands for, right?  “Fix it again, Tony!”  I think my dad was partial to them because they’re Italian cars and he’s Italian.

One of the FIATS was blue and the other was yellow.  They called the yellow one “yellowy”.  Do you have any idea what they called the blue one?  Yup—“bluey!”  (this was way before the children’s show “bluey” about a blue heeler pup. )

Anyway, my dad and brothers spent countless nights in the garage restoring those FIATS, fixing them up so they could use them when they got their driver’s license in high school.  They turned out really nice, and they ran for at least a little while!

Our passage from Isaiah paints a beautiful picture of what God’s restoration looks like in a broken world.

It is a picture of people from every nation across the earth streaming to encounter God in the mountain where he dwells.  They are coming with open hearts and open minds to learn the ways of God, so they can walk and live as God intended for humanity to live, where weapons of violence and war are turned into tools for peace and plowing the land, to produce instead of destroy, where people, diverse people from across the globe live in peace and harmony with each other and with all of creation.

I like what a note said in one of my study Bibles about this passage in Isaiah:

Isaiah presents a vision of God’s love and concern for all nations.  Isaiah is overwhelmed by the greatness of God, who stands as a firm foundation in the chaos of war and moral decay.  Knowing God’s greatness, Isaiah can offer hope rather than despair—and not just wishful thinking, but a hope with its eyes wide open to the reality of sin and its consequences.

Isaiah’s vision of God is big enough to give us hope for restoration, even with eyes wide open to see all of the manifestations of sin and brokenness in our world.

First at an LGBTQ bar in Colorado Springs and then at a WalMart in Chesapeake here in Virginia.   These shootings remind us of the death and suffering that can happen when people with hatred in their hearts are able to gain easy access to guns.

“Gun violence is a heart issue and a policy issue.  Every country in the world has people who are hateful and violent.  Every country has violent video games and movies.  What is unique about America is our unprecedented access to guns and weapons of war.”

We had Shane and Raw Tools here this past April to enact what Isaiah talks about—we beat a gun into a garden tool to remind us of God’s vision of restoring peace in a violent world.

And this past week, in light of the Club Q mass shooting in Colorado Springs, Shane posted a powerful story on his twitter feed:

A guy who lives in Colorado named Jared Keller donated his AR-15 to Raw Tools to be turned into a garden tool.  He said, “I’ve owned this AR since ’05, but have come to lament what it now represents in America.  Thank you to @RAWtools for beating swords into plowshares.”

If this isn’t a sign of God’s vision of restoration, I don’t know what is.

I believe that another manifestation of sin and brokenness in our society today is the rise of racism, white supremacy, and Christian Nationalism.  I can remember just a few years ago that pastors and churches that acted in racist and nationalistic ways would try to cover it up.

But now more and more of them are embracing it unashamedly, they’ve convinced themselves that it’s the “Christian” thing to do.

A guy named Stephen Wolfe recently came out with a book that promotes Christian Nationalism, and the pursuit of political power to impose Christianity on society—he wants us to go back to the Middle Ages, or the dark ages.

And then Stephen Wolfe gave a rousing endorsement of a new book called “Who is My Neighbor?: An Anthology of Natural Relations”  by Thomas Achord and Darrell Dow.

“Who is My Neighbor?” does not advocate for the way we would understand the parable of the Good Samaritan, where the one who helps and shows compassion is a foreigner and outsider.

No, this book is an anthology of quotes and ideas from people throughout history who have promoted the superiority of the white race and the importance of keeping it “pure”.  Yeah, like Hitler and the Nazis.

For example, one of the quotes highlighted on the back cover of the book says this:

“Immigration, diversity, and other factors will reduce the IQ of white countries, and will cause the collapse of western civilization as we know it.”

It’s mind-boggling to see these ideas gaining more popularity in certain sectors of our country, in one of our political parties, and even sadder to see it creeping into Christians and the Church.

I believe that a big reason why racism, and prejudice against people different from us, and our fascination with guns is due to fear.

Fear is so easy to conjure up in people, and the reality is that it’s a great motivator.  Politicians know this, that’s why their ads play to the fears that people have, and create problems that make us afraid.

The media knows that fear sells, so they show us story after story of events that make us afraid.

The problem is that fear can blind us from seeing God’s restoration at work in the world, paralyze us from walking in God’s way as Isaiah describes it, it can kill our hope, and prevent us from being able to love.

Author Norman Wirzba in his book, “Way of Love”  says that “Christianity is not, in essence, a set of teachings, but a way of life.  Christian faith is a vision of flourishing that bears witness to God’s love everywhere at work in the world.”

He says that “sin, at its core, is the failure to love.”  I like that definition of sin!

Henri Nouwen put it this way:  “Following Jesus is moving away from fear and toward love.”

I believe that moving toward love first and foremost means receiving with open arms God’s unconditional love for us.  That’s where it all begins, folks.  These manifestations of sin and hatred we see all around us are rooted in not experiencing love.

But God offers it to us freely and with no strings attached.  And when we embrace it, fear gives way to freedom to empower us to love, and to live in peace and work for peace.

Brian Zahnd wrote this great book called “Farewell to Mars: An Evangelical Pastor’s Journey Toward the Biblical Gospel of Peace.”

We’re called to be peacemakers, and peacemakers cannot be fearmongers.  The biggest difference between a peacemaker and a fearmonger is whether or not they really believe in the unconditional love of God.

Only those who know—deep inside their heart—that they are loved can be true peacemakers.

Friends, I can’t think of anything better that can give us hope for restoration than knowing we are loved by a God who loved this world he created so much that he became one of us in order to show us the way of love.

Maybe that’s the restoration that you and I need the most as we begin this season of Advent and prepare for the coming of Jesus our Savior into the world.

Maybe we need to look inside ourselves to restore our relationship with the God who loves us, with all of our warts, shortcomings, and sin.

So in the midst of the pain and heartache and disappointments and brokenness in our own life, let’s open ourselves up to be restored in our relationship with God.

May we remember just how much God loves us and may we allow it to penetrate deep into our hearts and lives, may we heed the words of the Joy to the World that say, “let every heart prepare him room” so that we can live at peace with ourselves and also embrace our calling to be peacemakers in a world that so desperately needs God’s restoration.  AMEN.